How does Stonehenge play an intricate part in the science of Archaeoastronomy?

Archaeoastronomy is an interdisciplinary field that relates archaeology, anthropology, and mythology with astronomy.

The Archaeoastronomer wants to gain insight into the intellectual achievements of cultures:

Three related terms are used to refer to specialized areas of the field:

The basis for archaeoastronomy is the belief that early peoples, in even a primitive state of intellectual advancement, took notice of the sky and its changes. Which of these features were recognized, and how they were used for practical or ceremonial purposes, is a measure of the cultural complexity of the people studied.

The most obvious of the periodic changes are the phases of the Moon (the basis for the month) and the annual motion of the Sun and changing panorama of star patterns, by which the year can be accurately defined. Identifying the planets and their cyclic movements is more complex, as is plotting the complicated pattern of the Moon's motion in the sky. In time the culture made use of their observations in rituals and myth, for regulating a calendar, or for purposes such as anticipating yearly floods and setting dates for agricultural activities.

ORIGINS IN THE OLD WORLD

Evidence for early knowledge of the heavens is found in such archaeological features as stone alignments and stone circles, in building orientations, and in pictorial or written records. The best-known evidence that early humankind used the sky is Stonehenge, near Salisbury, England. 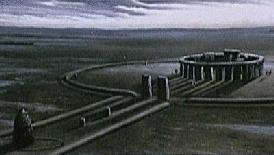 In 1740 William Stukeley was probably the first to apply Archaeoastronomical ideas. Stonehenge received all the attention. Stukeley noted that the principal axis of the monument was oriented to the direction of sunrise at summer solstice (June 24). Today the summer solstice falls on June 20 or 21.

In the late 19th and early 20th centuries these ideas became the subject of controversy when Sir Joseph Norman Lockyer, Piazzi Smyth, and others attempted more extensive astronomical explanations of Stonehenge and other British stone circles, of the Pyramids and temples of ancient Egypt, and of certain temples of classical Greece. In all cases, alignments on various astronomical bodies were noted, and attempts were made to link these to the calendar and to sky worship.

Lockyer also tried to confirm or establish construction dates of the sites for which astronomical orientation was claimed, making use of known changes in the aspect of the heavens that result from long-term changes in the rotational axis of the Earth (precession).

Over the millennia, solstices shift slightly forward in the calendar. Astronomers have accounted for this shift by observing that the Earth precesses slowly as it rotates on its axis, like a top that wobbles as it spins. This precession makes one complete cycle every 26,000 years. This phenomenon causes the time of the solstices and equinoxes to change and also causes, over time, changes in the apparent location of a polestar, or North Star.

Today the field of archaeoastronomy is actively studied in Western Europe.

Scientists have demonstrated that a relatively high level of astronomical achievement existed among the Early Bronze Age inhabitants of the British Isles and Brittany (western France).

More controversial are the suggestions that the Bronze Age builders used structures such as Stonehenge to predict the dates of lunar and solar eclipses and that a standard unit of length ("the megalithic yard") was used in laying out the megalithic stone circle.