Geoffrey of Monmouth in his "Histories of the Kings of Brition" brings up King Arthur and Stonehenge for the first time. Geoffrey talks of Vortigern, Earl of the "Gewissi" (in the time of King Constantine) who was planning to steal the crown from Constantine's son, Constans. When Constans was made King, Vortigern bribed some men to burst into Constans' sleeping chamber and cut off his head. Vortigern then became King and ruled until the Saxon's, lead by Hengist and Horsa invaded England in the 5th century. Vortigen married Hengist's daughter Rown in hopes to quell the invasion but Hengist still planned to take over Briton.

It was one faitful day near Salisbury "on the Kalends of May" when Hengist called a meeting of Britons and Saxons. During the meeting the Saxons attacked the Princes of Briton and "cut the throats of about four hundred and sixty." This act lead to the battle of the Britons and Saxons at "Mount Badon" in the 6th century where King Arthur is mentioned for the first time.

Ambrosius Aurelianus, according to Geoffrey was Uther Pendragon's (Arthur's magical father) brother and ruled with the help of the wizard Merlin. One day the King came to Salisbury "where the Earls and Princes lay buried whom the accursed Hengist had betrayed" and was brought to tears. He wondered how best to make the place memorable. Merlin said,

"If thou be fain to grace the burial-place of these men with a work that shall endure forever, send for the Dance of the Giants that is in Killaraus, a mountain in Ireland. For a structure of stones is there that none of this age could raise save his wit were strong enough to carry his art. For the stones be big, noris there stone anywhere of more virtue, and, so they be set up round this plot in a circle, even as they be now there set up, here shall they stand for ever." 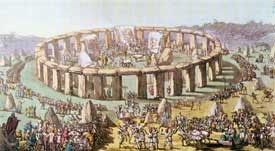 The Kind decreed that Uther Pendragon and fifteen thousand men would go to retrieve the stones. According to Geoffrey of Monmouth, the stones of the Giant's Ring were originally brought from Africa to Ireland by giants. The stones located on "Mount Killaraus" were used as a site for performing rituals and for healing. Led by King Uther and Merlin, the expedition set off for Ireland. The Irish heard of the expedition and King Gilloman raised his own army vowing that the Britons should not "carry off from us the very smallest stone of the Dance." In the end, Uther and his men prevailed in their battle with King Gilloman and proceeded to Mount Killaraus.

The Britons were unsuccessful in their attempts to move the great stones. At this point, Merlin realized that only his magic arts would turn the trick. So, they were dismantled and shipped back to Britain where they were set up as they had been before, in a great circle, around the mass grave of the murdered noblemen. Geoffrey also adds that Uther Pendragon, and King Constantine were also buried at Stonehenge.